Some times ago, I started playing with Ruby after several years coding in Java and Python and I must admit that I really appreciated the elegance of the syntax, the simple object model and the natural way to jump in hacking meta-programming mode. I am not an expert but all these seduced me.

In my investigations, I usually look at the ecosystem coming with a language: the tooling, the documentation, the way the developer community is working. After a good surprise with the language, came another good surprise with the available tools. For instance RVM is a really convenient way to manage the different interpreters and the gems you install within each one from RubyGems.

I had a small project to build using curses library. A binding is embedded in the Python library and so seems it to be the case in Ruby’s stdlib. I dare say my first attempts where not that successful (require 'curses' failed). Googling around, I found out that it was removed from the stdlib in 2.1.0 release even if it was still in the official documentation (bug).

This small issues solved, I looked for tutorials but the amount of documentations is not that high. Hence, the aim of this post: having the same level of tutorial for curses as it is in Python documentation. I don’t think that a Rubyist should look at the original C documentation of curses to start with curses ruby binding.

Basically, curses is an old library distributed on many Unix distribution whose goal was to manipulate a terminal screen to draw windows, to display some text and also to handle the input events (keyboard, mouse). In this sense, it was an ancestor of graphical user interfaces. 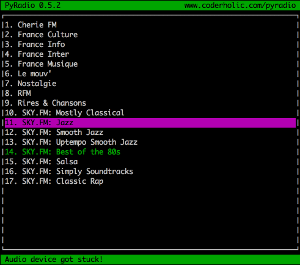 Why would you want to use this today when we can manipulate a computer with a high definition 3D graphical interface ? There could be many reasons for this:

Ruby provided a binding module included in the standard library until Ruby 2.0. To use it from Ruby 2.1 and more, you will have to install this as a gem:

This done, we are ready to start the curse tutorial.

A window is a regular area on your terminal screen. It can be either the whole screen or a smaller part of the screen. You can create as many windows as you want but there is one, named stdscr (standard screen) which is created on initialization. It takes the maximum lines and columns available on the current terminal.

Hence, before using curses you have to initialize the library: this step will gather information about your terminal and save the current modes (see Curses.def_prog_mode). You will be able to access these data as it is shown in the following example:

To use the curses library in a program you need to load it thanks to the require statement which gives you access to the Curses module. The Curses.init_screen initializes curses, we retrieved the number of lines and columns available on the stdscr. To be sure curses is stopped at the end of the program execution, the call to Curses.close_screen is enclosed in an ensure block (so the terminal modes that where saved during initialization are restored with Curses.reset_prog_mode). This will avoid messing up your terminal if an error occurs.

Notice that we could have included the Curses module to avoid repeating the Curses namespace all along the program.

After initialization, you can set several options. Generally, you don’t want to display the keys that are pressed by the user when they are caught by the Curses.getch function or the Curses::Window.getch method. To disable this, you can use Curses.noecho. To reactivate it, Curses.echo is available.

When working in a terminal, commands are buffered until the user press Enter. You generally will not expect this behaviour when writing a graphical user interface and you will want the key to answer as soon as they are pressed. This is what the cbreak mode has been created for. To toggle between these two modes, you can use Curses.cbreak and Curses.nocbreak functions or their aliases Curses.crmode and Curses.nocrmode. If you want disable the interpretation of the interrupt, quit or suspend characters, you can enter the raw mode thanks to Curses.raw and exit this mode with Curses.noraw.

Another interesting thing is to control the visibility of the cursor with the Curses.curs_set(visibility) function where visibility can take 0 (invisible), 1 (visible) or 2 (very visible).

Today, many terminals applications can display colors. If you want to use this facility, you must call the Curses.start_color just after the call to Curses.init_screen. To test if your terminal supports colors, Curses provides the following method Curses.has_colors?.

Text attribute is a set of flags linked to the way you want the text to be displayed. For instance, you may want to display a blinking text in red on a blue background. So, there are special attributes relative to special effect and, regarding colors, attributes are defined as pairs composed of the foreground color and the background color.

Hereafter is a list of special effects with there builtin values:

Defining color attributes is done with the Curses.init_pair(pair, fg, bg). A pair for colors are associated to an id. For instance, if you want to use red color to write on a blue background, you can define a key pair as shown below:

To turn this pair into an attribute, you have to use the Curses.color_pair(pair) function.

Now, previously described attributes can be OR’ed to be used altogether and passed to the Curses.attrset(attr). In the following code snippet, “Hello World” will blink on the screen written in red on a blue background.

Using the functions exposed by the Curses module will implicitly work on the stdscr. You can move the cursor on this screen and display a message wherever you want thanks to the Curses.setpos function. Be careful: the position is defined by a couple (line, columns) with origin at the top-left corner.

Many functions defined in Curses module like addstr, getch are simply a shortcut to the Window.addstr or Window.getch called on the stdscr Window object. Hence, until the end of this tutorial, we will talk only about the methods defined on Window object.

The previous example could be rewritten as follows:

But windows become an interesting feature when you need to manage several parts of the screen with different refresh cycles. Curses was created in the old ages when the terminal had very slow connection to the server and refreshing the whole screen every time would not have been optimized.

With a Window, you define a rectangular area inside the screen (for unrestricted area, please have a look at Curses::Pad object). Each window has its own dimension and upper-left corner origin that you can pass to the constructor Curses::Window.new(height, width, top, left). There are several methods on this object that need to be understood for the next example:

Basically, a user will interact with the terminal thanks to his keyboard and this is what this chapter will deal with. We won’t talk about the ability to handle the mouse control in this tutorial.

You have one main way to capture the keys the user pressed: Window.getch will wait by default the user to press a key and return an uninterpreted value (pressing ‘a’ will return ‘a’, pressing ‘F8’ will return a code). This default behavior can be changed in two ways.

First the blocking nature can be deactivate with Window.nodelay=(bool) method. If the value is set to true, the method getch won’t wait for the user input.

Second allowed change is the fact that Curses can interpret the key pressed. This is activated by the Window.keypad=(bool) method. If the value true is passed to this method, when the left key is pressed, the getch method will return Curses::Key::LEFT. All the keys are mapped inside the Curses:Key module. The following example shows this in action:

There is another method dedicated to capturing the user input: Windows.getstr. This method is probably less useful than Window.getch but can be handy in some situations. This method, by default, waits for the user input but continue acquiring the characters pressed until the user press Enter. The return value is a string.

You probably wonder why the getch method is attached to a window object. It could be a general function defined at Curses module level (In fact, it is the case, but it is only a shortcut to Curses.stdscr.getch). Actually, the window on which you call the method takes the focus. This means overlapping windows will put in the background. Let’s have a look at what happens when you draw some windows and call Curses.getch.

The window ‘win1’ will quickly appear and fade out because the stdscr will gain the focus and we can say it will come upfront hiding as a metter of fact ‘win1’.

A solution to this is to create subwindows of the stdscr windows. stdscr can then be considered as a container. Creating a subwindows is done with the Window.subwin(height, width, top, left).

I hope this is a good start point Curses Ruby API and this will be useful.

If you spot some errors or have any suggestion about this text, please open an issue on https://github.com/stac47/stac47.github.io.